It was propitious that IBM’s Watson machine was playing Jeopardy this week. I reorganized the lectures so I could introduce the AI material before the competition. Then, on Tuesday we had a small reception with pizza and salad before going to a screening of the second night’s competition. It furthered the “more relaxed” feel of the courses’ second half.

AI would normally have been taught later in the term, mostly as a “pick up” topic, as it seems somewhat secondary to the big ideas. Moving it was effective. 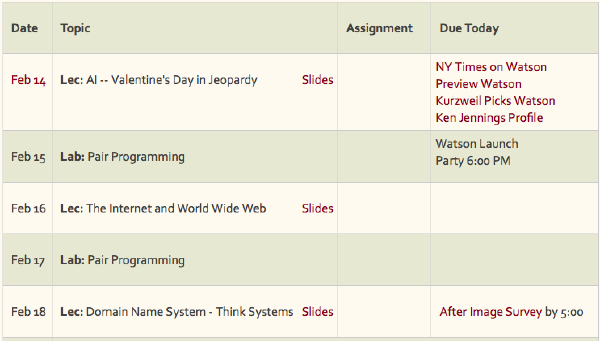 Calendar Entries for the Seventh Week

Lecture 14 Feb: I augment what I think of as a “standard” introductory AI lecture with Watson-related material. Having chatted with non-techies over the weekend and found that most people don’t see it as a big deal, I decide to give an explanation of why chess is easier than understanding a pun.

Lab 15 Feb: It was an opportunity to work on pair programming with assistance available. Most teams had already been checked off, and so they started work. I check off two more in lab, but still, not every pair has been approved.

Lecture 16 Feb: The topic was the Internet, IP, Ethernet and related matters. The goal, like all of the technology lectures, is to remove the “magic” of networking, and show it as a completely practical and understandable process. The analogies – Cerf’s, IP is like sending a novel by postcards, Ethernet is like a conversation at a cocktail party – make these concepts accessible.

Lecture 18 Feb: The topic is how the Domain Name System translates domain names like spiff.cs.washington.edu to 128.208.3.136. This is also a chance to talk about physical and logical forms of a phenomenon such as computer names. Finally, it is important to discuss the design issues that arise in creating the DNS, such as robustness, fault tolerance, redundancy, and other systems design concepts. I also include “thinking at scale.”

Overall, the excitement about Watson was shared by only a couple of students in class. Generally, most saw it as just a publicity stunt.

Monday’s AI lecture was fine, but I think I failed – and the prep material failed – to persuade the class that what Watson was doing was amazing. Chess still seems to be tougher than puns in their minds. The topic of AI is always engaging; they immediately landed on emotions as a stumper topic for the Turing Test. The creativity part of the lecture was less effective than in previous classes I think, possibly because they had struggled enough with Albers that it had become a painful topic. I don’t know.

Tuesday’s pair programming engendered a lot of apparent enjoyment in lab. The teammates appeared to be more “equal” when they were the same sex, probably an obvious observation.

Wednesday’s Internet lecture also held the class’ interest. There were questions about interacting with ISPs unrelated to the lecture. The analogies worked, as usual, and everyone seemed to get them.

On Thursday, another day of pair programming … the excitement has evaporated, and now the hard programming and debugging have consumed the students. In conversation, they are definitely positive about it, though.

Friday’s lecture was my first try at an introductory DNS lecture, and I pronounce it a complete success. I had originally thought that I was belaboring the “problem,” since I seemed to be saying it in three different ways. But in reality, it was probably right: They understood what the problem was, and one student essentially figured out the process based only on the underlying mechanisms. The next slide showed that her guess was correct. Indeed, the setup problem that was going to promote more discussion — how can I log in from Miami to my computer in Seattle — kind of flopped, because the class had already gotten the idea, and why belabor it?

Diagrams of the two extreme cases for authoritative name servers.

On balance it was a very positive week. The pair programming is getting rave reviews from virtually the whole class (apparently, one pair are dissenters). And the pace is more civilized, too.

But, without a doubt the best part of the week was that I got a lot of face time with the students. First, they had to come in in pairs to discuss their project. This was fun because they only had to explain it, and it was fun to joke around about what they are doing.

Also, they came in one at a time to correct their mid-term tests. (At Susan’s suggestion, they were allowed to work out the solutions to the problems they missed, come in with the correct answers, explain them to me and get (up to) half credit restored.) Though I was initially skeptical, this turned out to be a tremendous benefit in terms of finding out first hand what they understood, and what they didn’t. Also, in a couple of cases where they still couldn’t do a problem (usually the function for figuring total money in dollars from a bunch of coins), I would step through the process with each one. This exercise (which was really valuable) showed me that I need to emphasize still more that thinking of the computation from the code’s point of view is essential. I doubt it can be over-emphasized.