A major challenge in the AP CS Principles curriculum is teaching Big Idea #1, “Computing is a creative human activity.” It’s number one on the Big Idea list, which seems appropriate because it is one of the best features of the field. Some students are naturally creative, and they hardly need the point explained, but for most of my students, I believe this point is best “taught” by giving them opportunities to be creative, and guidance in how they might proceed. Much of this week was spent devoted to that goal.

The weekly calendar shows that Monday’s assignment was a week of “unconstrained programming,” 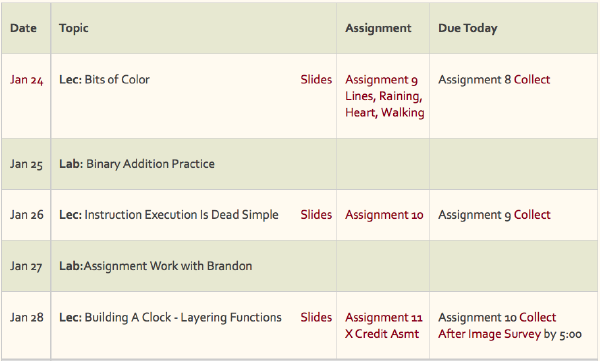 Calendar Entries for the Fourth Week

Lecture 24 Jan: The lecture began by cleaning up a few details about Processing syntax and execution. Then we returned to the Albers in a Click topic to explain why I had assigned it. (It was by now a program of the past, and whatever frustration might have been engendered while programming it was gone now.) Besides being a cool application, it was making the point that computational artifacts can raise questions in other fields, this one being art. (It’s not an art class, so we were not going to answer the questions.) An example was, “If programs can create work similar to Mondrian, Pollack and Albers – famous artists of the 20th century – using random numbers, what role did the actual production of the art by these men play in their work?” “Would they have done different work if they could have experimented this easily?”

After that, the main lecture content was a firm technical foundation for RGB color, including explaining the mystery of why yellow is the combination of Red and Green. Then the task of turning “husky purple” redder became a pretext for introducing binary arithmetic, as we added intensity to Red in several steps.

Assignment 09: The assignment – it was divided into two parts – was to create four programs in Processing that would display something on the screen that would hold a person’s interest for a few moments. Four examples were given with the assignment; see the class examples page, http://www.cs.washington.edu/education/courses/cse120/11wi/classexamples.html. Two programs were to be turned in Wednesday, and two turned in on Friday.

Lab 25 Jan: The lab practiced binary addition, per the preceding lecture. Then, in the free time, students worked on their assignments. This had the benefit that they could ask Brandon for help.

Lecture 26 Jan: The lecture opened with a short description of how to print text on the screen in Processing; (it’s a graphics language, text is harder, figures are easier). Then we moved on to the fetch/execute cycle and the components of a computer. We worked through the standard content, including instruction interpretation. A full example was illustrated.

In the last five minutes, the lecture finished with an explanation of the operation of an nMOS transistor; this was motivated by the ALU evaluation of

I told the class that this was for their own interest and would not be on any test.

Assignment 10: It is a continuation of the last assignment.

Lab 27 Jan: This was time to work on the assignment. All but one student was present and worked steadily.

Lecture 28 Jan: The lecture began by introducing the basics of functions, including parameters and the Processing syntax and semantics. This was followed by a demo in which a timer was developed in several layers (6) of abstraction. The base layer drew the hexagonal element and it built from there. The top level ran the image at the frameRate(10), allowing the time to count “1” with each image refresh. 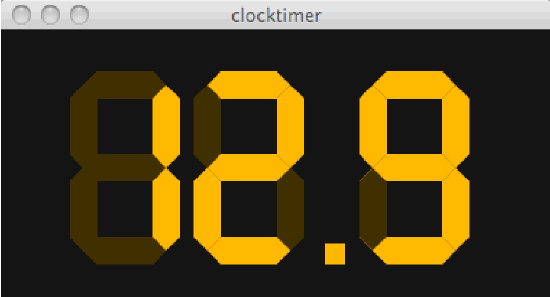 Assignment 11: The assignment was to apply the ideas of functional abstraction exhibited in the lecture to the creation of the Sudoku GUI. The solution probably “requires” one less layer of abstraction, but it is plenty challenging for the students.

Nearly all of the students rated the “free programming” assignments of the week as the best part, the most fun and engaging. They appreciated the flexibility of managing their time better according to the After Image survey. I adopted the new-assignment-every-two-days approach to bring the class up to speed with the programming, but now I think we can be much more flexible in the last half of the term.

The results of the “free programming” were quite variable, but most students did something quite ingenious even with their limited knowledge of programming. Several of them tried new things on their own out of the reference materials. Only the few who are really not getting the concepts failed to express themselves through programming.

Monday’s lecture was more relaxed, as planned. It was curious in two ways. First, the miracle of colored light, and the differences it has with our usual experience with pigment seemed to hold the students’ attention, but they didn’t seem to be much interested in it. We then pushed on to do binary addition, and curiously, they were interested in that.

Then, in Tuesday’s lab, Brandon practiced with them on doing addition. Later, in the After Image Survey, someone complained that they only learned about how to do binary arithmetic, but didn’t actually use it. (I thought that was what computers were for!) The bottom line: binary, interesting; light, uninteresting.

Wednesday’s lecture continued the more informal style, which went well. The informal chatter at the start concerned printing on the screen, and everyone seemed attentive; later I heard that several students had tried it successfully. The topic of how a computer works was of interest, and the indirect reference to data through the memory seemed to go across easily. Good. In the “Department of Surprises”: when I finished up with how an nMOS transistor works in silicon – a true miracle of the universe – exactly three people seemed to be interested. The rest of them, having been told that it wouldn’t be on the test – simply packed up their papers and waited for me to quit talking.

Thursday’s lab had students work on their “free programming” assignment. I’d expected Brandon would have to deal with fairly exotic problems as the students’ dreams outpaced their capabilities, but his report was contrary. There were only a modest number of questions, and most students just worked diligently on the assignments.

Friday’s lecture, which I’d looked forward to as a great chance to program in class and guide students through functions went well, but it wasn’t as much fun (for me) as I’d hoped. At the last minute I decided not to actually do the typing real time – the code was already in the slides so we could just go through it – and this meant that we did get all the way through the material. I did show off the app running. My best idea was to create a listing of the code for the students and to distribute it. This meant that students could follow along despite the fact that the displayed program text is necessarily tiny, and about 1/3 of it is too low to view beyond the second row of seats. So, in the end the decision not to develop the code in real time was probably right, but where’s the fun???

When the lecture was over, a student came forward with a question about “formal-actual correspondence,” which is the property that arguments to a function must correspond 1-to-1 to the parameters. I’d left that out. It’s a danger of the first time through, and probably would have come in the patter had I actually done the programming. So, I hurriedly made two slides and revised the posted version of the slides to include that material. I appreciated her question; it saved a lot of confusion.

From the student perspective, it was a great week. They had a chance to program, pretty much unconstrained by anything other than the computer itself. And I got them to see computers as a place where “human intent” can be expressed.