It was a short week because Monday’s holiday (MLK Birthday Celebration), but there was progress in learning the Processing language. The students described themselves a very engaged in learning it, and enjoyed the assignments.

The content of the week is summarized by the calendar: 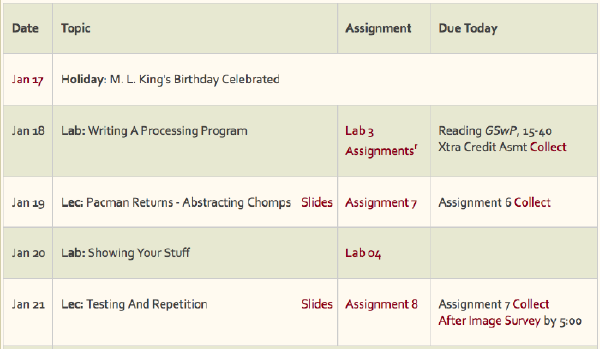 Lab 18 Jan: The lab exercise was to move a colored box across the Processing canvas as a simple exercise in using variables, declarations, assignments and expressions. Most students finished the task within the allotted time; three did not, but they completed it shortly after class.

Lecture 19 Jan: The lecture was a programming demonstration, designed to work with a new language feature (arcs) that required study of the documentation. The point was to illustrate incremental program development, to introduce of the mod (%) operator, and to emphasize programming as a directed process implementing human intent. The task was to program Pacman (yes, the ancient video game) to move across the screen eating pills.

Assignment 07: Construct the Blinky ghost from the Pacman game, and using variables and expressions make its eyes move; this is preparation for the next assignment that uses mouse motions to control the ghost.

Lab 20 Jan: The lab returned to the myCSP.html Web page that the students posted in their second lab. Now with Processing capable of generating an applet to display in a browser, this lab was devoted to explaining how to modify their portfolio page, transfer the files and link them in to their page.

Lecture 21 Jan: The lecture introduced if-statements and for-statements, but also reviewed the other features of Processing that we’ve had previously in order that all of the material be in one place. There was emphasis on other resources that could be consulted.

Assignment 08: Building on the Blinky ghost code from the last assignment, make the ghost move left or right depending on whether the mouse is left or right of the ghost; make the eyes adjust to the direction of motion, and toggle color (between red and yellow) on mouse clicks.

Student interest in Processing continued to be “strongly engaged”, despite the not-infrequent stumbles in getting it right.

On separate mornings this week two women came in to chat. To my astonishment both made the same two points: The were not technical majors (Communications, I think in both cases) and didn’t expect to like this class – but they do – and further, not being technically inclined, they didn’t expect to do well in the class – but are. This is exactly the end state of this effort, so with any luck we can carry this through and have it apply to everyone.

At the other end of the spectrum, I asked another student to come by to discuss her homework. (One benefit of this study is that we are watching students carefully, and when they don’t deliver, we know immediately.) She seemed not to be investing the time required to actually learn the material in the assignments, and so continued days later not to understand the basics. I explained that it was an accumulating class and that in the future she would have to use material she was studying today. It was a friendly enough conversation, but it contrasted amazingly with the two others.

Wednesday’s lecture engendered some discussion, and in a couple of cases some very clever suggestions – the students are thinking. The mod operator was new and they grasped both the operation and use. However, I felt that the lecture did grub around in very low-level details – antialiasing for instance was mentioned to redraw the image cleanly – that just didn’t need to be covered. In the After Image survey, one student complained that it was a boring lecture, but was out-voted by five others that thought it was engaging. I’m of mixed mind on it.

Thursday’s lab was a hit. Students were happy to get their work out in a publicly available form. This also served to solidify the value of mycsp.html.

Friday’s lecture was the laundry list of facilities that we are using in this month’s programming in order to have it one place. The things that I had already taught were reviewed, to good effect, I think. It definitely took more time than I had planned for. And I got through the rest of the material, but not the last application of mod, which I’d planned to reinforce Wednesday’s lecture.

The “Blinky Assignments” (Wednesday and Friday) were very well received by 80% of the students, though again the After Image included one student thinking it was boring. (Who is this person???) I think the value of this one was that students were pretty much in control of the whole process and though it presented plenty of challenges, they were challenges that they could over come. In office hours students comment about the great feeling of “getting it”!

The students continue to be engaged and to like programming. The After Image Survey continues to reveal that they are most interested in it, as opposed to the “principles part” of the course. Given that the class was advertised as NOT turning them into programmers (and it won’t), they seem very eager to head in that direction.

With the completion of the third week, I have decided that I need to reduce the formality of the class, and make it more chalk-talky. The students like the class; I like the students … let’s try to make it more casual. I’ll start that Monday.